Canada’s national dishes are some of the most delicious foods in the world!  Of course, as a native Canadian I might be a bit biased 🙂  Having grown up with most of these foods, I think everyone will love them too.

When I travel around the world, one of my favourite things to do is try the food that is special to that country.   Food is a great way to connect with and learn more about the history and culture of somewhere new.   I recommend being brave enough to even try some of the more peculiar specialities!  Maybe not hákarl , but most things! Most countries around the world have unique food traditions, including Bulgaria with its Bulgarian yogurt.

Disclosure:  Some of the links below are affiliate links, meaning, at no additional cost to you, I will earn a commission if you click through and make a purchase.  I really appreciate your support!

These delicious bars are so sweet they’ll make your teeth itch!  Named after a city on Vancouver Island, a Nanaimo bar is made of three layers:  a wafer and coconut crumb base, a middle layer of custard flavoured butter icing, and a top layer of chocolate ganache.  It’s as delicious as you might imagine!

Nanaimo bars are best just out of the freezer and in small amounts!  They’re not complicated to make but are a little fussy.  When you make them, use this recipe, which comes straight from Nanaimo.  When you’re in Nanaimo itself, make sure you go on the Nanaimo Bar trail which guides you to the all of the locations and varieties of Nanaimo bars.

The Great Canadian Baking Show did an incredible episode demonstrating how to bake the best Nanaimo Bars!

I don’t think Nanaimo bars are weird but there are plenty of weird foods out there!  Abby has written a great post about more than 30 weird foods to taste.  Check it out! 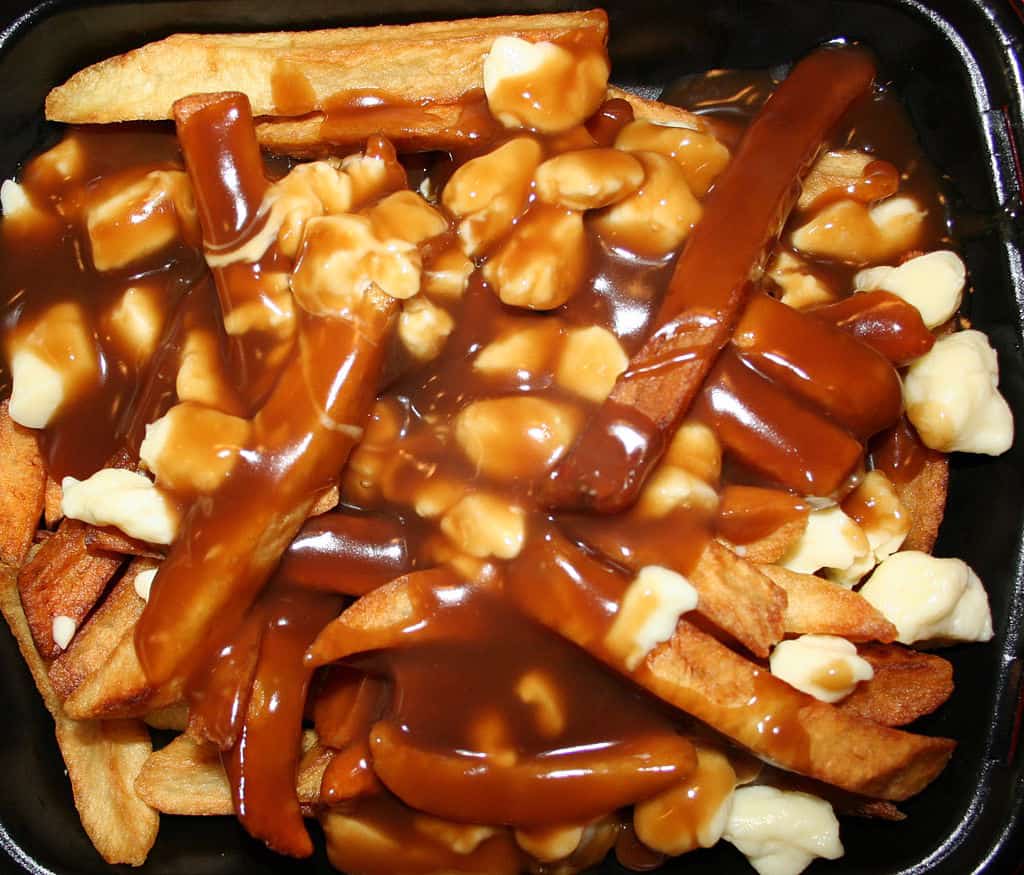 Originating from Quebec, poutine consists of french fries and cheese curds topped with brown gravy.   I must admit that poutine is not one of my favourite national dishes of Canada!  Those who love it love it a lot, though.  My daughter even craved poutine during her pregnancy!

Restaurants love to serve poutine in a variety of ways, and the toppings can sometimes vary.  Smoked-meat is a popular addition, as is sausage and chicken.  Joe Beef, the famous Montreal restaurant, offers poutine with caviar and truffles!

If you want to travel to Quebec City to try the poutine there, check out Brenna’s great Quebec City itinerary.

You can find poutine almost almost everywhere in Canada now as well as in the border states in New England, the upper Midwest and the Pacific Northwest.

Nectar of the gods!  I’ll never forget my first visit to Schwartz’s deli in Montreal.  We had to wait in the long line out the door just to get a table; I was assured that it was worth the wait.  We eventually got a table and our waiter approached and asked me if I wanted my meat “lean, fat, or extra fat?”  I could only mumble my reply “ummm…..fat?”. My response was met with a nod of approval from the waiter 🙂 .  Never order the lean!

Check out Mimi’s great post on all the best things to do in Montreal while you’re there!

Served on light rye bread with yellow mustard, a Montreal smoked meat sandwich is a thing of beauty.  Although available across the country, this favourite national dish of Canada is best enjoyed in Montreal.

Before you go Montreal for a delicious smoked-meat sandwich, check out Christopher’s great 48-hour itinerary for Montreal.

Butter tarts are a true Canadian tradition!  Recipes are closely guarded in families and there’s always fierce debate about whether raisins should be included or not!

Simply, butter tarts are a mixture of butter, sugar, syrup and egg baked into a tart shell.  Some recipes include raisins (mine does), and some include walnuts or pecans too.

The best part of any butter tart and a hallmark of its quality is whether the filling is slightly runny.  Don’t be fooled by sub-standard, industrially produced butter tarts with solid filling!

Butter tarts are very easy to make.  Fair warning though – they’re very addictive!  This is a classic recipe.  Feel free to add raisins and walnuts too but be prepared for the wrath of traditionalists if you do!  Also try a butter tart square if you find one in the wild – delicious!

I’ve heard that there are great butter tarts at Chateau Lake Louise.  Take a tour from Vancouver to Banff and check it out!

Also known as a Bloody Caesar, this is a typical brunch drink consisting of vodka, a blend of tomato and clam juice (or Clamato), hot sauce and Worcestershire sauce, served in a tall glass rimmed with celery salt.  It’s traditionally garnished with a celery stick and wedge of lime.  Lately however, restaurants have been serving Caesars garnished with a green bean, bacon, jumbo shrimp, pickles and olives!

Caesars are similar to Bloody Marys, but so much better!  They’re touted as a great hangover cure, although I can’t vouch for its effectiveness 😉

The inclusion of clam juice in this fine cocktail makes many non-Canadians question its deliciousness.  Fear not!  Try one when you’re in Canada and you’ll see for yourself.

Check out Harmony’s excellent post for some great tips for visiting Canada from the USA.

Also known as boiled dinner, this is a traditional meal eaten in Newfoundland and some of the Maritime provinces (Nova Scotia, New Brunswick and Prince Edward Island) on Sunday.

Salt beef boiled with potato, carrot, cabbage and turnip are typical ingredients in a Jiggs Dinner.  Throw in a bag of pease pudding or figgy duff, and you’ve got yourself a meal!  If you’re like me and wonder why someone would voluntarily eat this national dish of Canada, it likely comes from the necessity of making do with what was in the pantry.  Or, in my case, you are invited to a Newfie’s home for a special occasion 😉

I’ve had Jiggs dinner once in my life and the occasion included cod kissing.   Screech was involved.  I’ll say no more.  Except there’s a photo, of course.

My kids love these and so does every other Canadian kid and many adults.  They are less acidic than salt ‘n vinegar chips, with a hint of tomato!  They are just what you might imagine, only better.  Amazon sells Ketchup Chips!  Ketchup chips are a great souvenir  to bring home from Canada.

All-Dressed chips are chips with the combined flavour of barbecue, ketchup, and salt ‘n vinegar chips.  Sadly, I can’t find them on Amazon so you’ll have to visit Canada to get some of your own 🙂

Oh the yummy goodness of maple syrup!  Don’t settle for the artificial sweetness of Aunt Jemima!  You haven’t tasted delicious until you’ve had genuine maple syrup on your pancakes or waffles.  My Mom used to bring back the good stuff when she visited Quebec when I was a kid.  It’s now widely available all over Canada!

Beloved by generations, these Canadian chocolate confections are unknown south of the border.    Smarties are colourful, candy-coated chocolate in a assortment of colours.  Legend has it that the creation of M&M’s were inspired by Smarties.  They come in regular and mini.  Coffee Crisps are alternating layers of vanilla wafer and a foamed coffee-flavoured soft candy, covered with a milk-chocolate outer layer.  Click Shop Now to buy on Amazon!

Those who love it, love it a lot!  Often shipped by the boxful south to American friends, this delicious peanut butter is strangely only available in Canada.  It’s sweeter than typical American peanut butter and not as salty.  I love it.  It comes in crunchy and smooth.  It’s available on Amazon by the tubful, or in a light version.

Do you the best places in Canada to visit?  Check out Katie’s post for some inspiration! 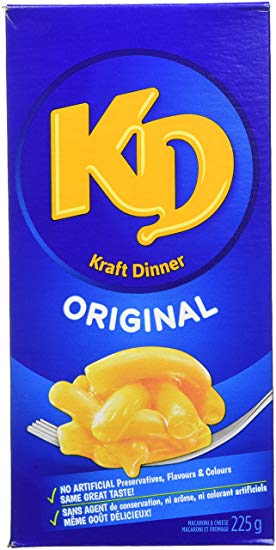 Known as Kraft Dinner in Canada and as Kraft Macaroni & Cheese in the United States, this boxed dinner is a staple for families with young children in Canada.  Patented in 1916 by Ontario-born J.L. Kraft, he recognized that powdered cheese was the path to greatness 😉  Mr. Kraft later also perfected Velveeta and Cheez Whiz (why am I not surprised?)

When I was working my first job and was yet unable to perfect my budget, I found myself with $7 until payday – 4 days away.  Ever the thinking girl, I purchased 8 boxes of KD and a bottle of ketchup.  By payday, I was good and sick of KD but I made it! Lesson Learned. 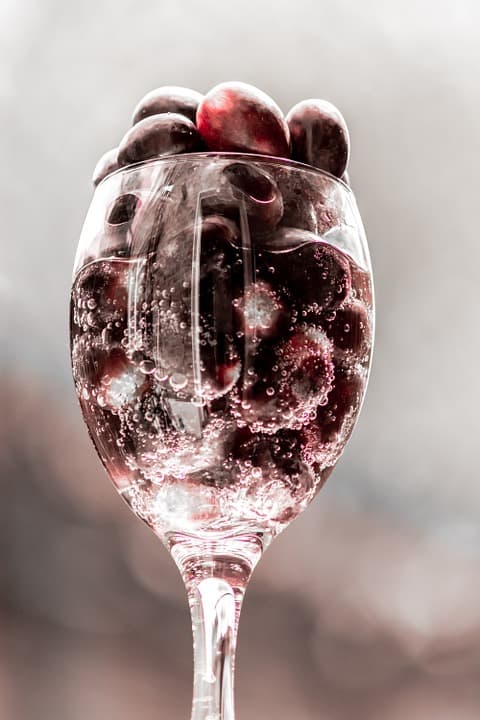 Ice wine is a type of dessert wine.  It is produced from grapes that have frozen on the vine.  The sugar in the grape doesn’t freeze but the water does, which allows for more flavour concentration in the grape juice.  The wine produced from these grapes is much sweeter.

Ice wine production is risky as the frost may not come before the grapes rot.  Crops must be picked quickly and at a moment’s notice when the vines are cold enough.

Ice wine is made in very small amounts.   Canada is a leading producer!

Ice wine is lovely to sip after a great Jiggs dinner 🙂 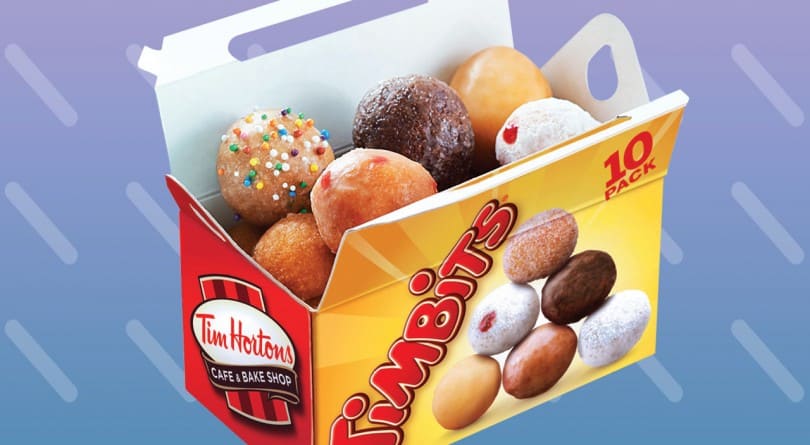 Timbits are the bite-sized morsels of traditional donuts, known as donut holes elsewhere.  Available in various quantities from any of the more than 3900 Tim Horton’s restaurants across Canada, they are as Canadian as maple syrup.  Tim Hortons restaurants first opened in Ontario.  There’s even a Tim Hortons two hours from beautiful Flowerpot Island, Ontario!

Enjoyed with a double-double or Steeped Tea, Timbits are the perfect antidote to a cold Canadian winter 🙂

What are your favourite traditional Canadian food?  What would you add to this list? 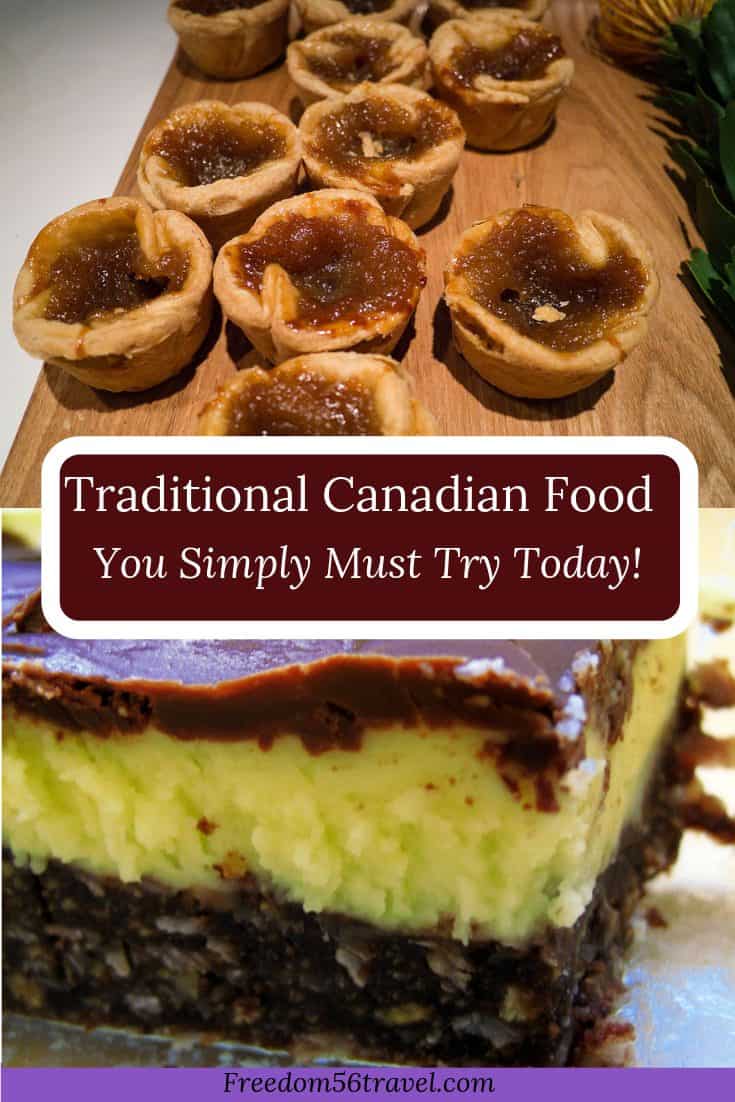