Not in a million years did I ever think I’d be a motorcyclist or love motorcycle touring! But here I am, well cemented into the fold of die-hard motorcyclists. How did I get here?

I don’t know if I can even count it as motorcycling (some of my friends definitely wouldn’t agree!), but I started riding a motorized two wheeled vehicle (aka a scooter) back in 2009. My beginnings were humble indeed, and didn’t stem from a need for speed but from what I termed “eco-guilt” at the time. I had a 30 minute commute to work and I drove a small SUV by myself. I thought I could do better for the environment. Thus began my first foray.

Surprisingly, I found myself quite liking the commute, especially when it was sunny! The less-travelled roads were easier to take, and I didn’t “burden” myself with any special gear or riding instruction. I merely got on, pointed it in the right direction and turned the throttle! It wasn’t motorcycling touring, but it was a beginning.  My woeful ignorance at the time is now a regret, but then I was blissfully unaware of such terms as ATGATT (*All the Gear All the time). I remember riding while wearing heels and just my regular jacket or coat, or no coat at all if it was warm. I also acquired very bright yellow raingear to use in bad weather, further diminishing my dignity. However I did use a full-face helmet while riding my scooter. One point for me!

I rode my Honda Jazz scooter for 3 years, totaling almost 10,000 kilometres. I stopped riding it when I moved closer to my office and had no further need to alleviate my eco-guilt. It sat idle for a while until I gave it to my son-in-law, who cheerfully rides it to this day.

In late 2014 I was spending time with a friend who was an avid motorcyclist but didn’t have a motorcycle at the time. He talked my ear off about how much fun it was and what joy it brought to his life and how much he missed it. I remember thinking it was a load of bull*. Wasn’t motorcycling only another means of transportation?

One fateful day in late October we wandered into a large local motorcycle dealer, our intent being only to look around. The charming salesman encouraged me to sit on various motorcycles (he clearly knew what he was doing) to see how I liked them and I obliged, thinking he was really wasting his time on me.

Until I sat on IT.

It was so pretty! It felt so comfortable! I felt so powerful sitting on it!

Needless to say, I signed the documents that day and went home wondering what in the world I had done. I didn’t have a motorcycle license and had no way of even getting this thing home! Significant buyer’s remorse set in.

My friend eventually rode it home for me, and thereafter it sat in my garage gathering dust. It taunted me from the garage for months. I didn’t tell anyone I knew that I had bought a motorcycle. It was my secret. Honestly, I wasn’t even sure I was going to keep it. It was rainy and cold and I saw no one out on the streets riding motorcycles. What had I gotten myself into?!?

In late January 2015 I found a local school offering motorcycle training. Their first classes of the season were beginning in late February so I decided to sign up. I thought I might as well see if I could actually ride this shiny, red motorcycle teasing me from the garage.

The first classes were HARD. There was a lot to learn and I was scared by all the terrible things that I learned could happen to me while riding. But then it got easier and I managed to pass my class and get my first motorcycle license!  I could potentially see motorcycle touring in my future!

So, I could now legally ride a motorcycle. But, I didn’t have any other friends who rode motorcycles, and riding alone didn’t seem to offer much prospect of fun. I turned to Meet Up and found a group meeting up to go for a ride that week. Great! I rode (somewhat raggedly) to meet these strangers to ride with. It turned out this was a group of people who all knew each other and rode together regularly throughout the riding season, called Coast Mountain Ryders (CMR). I had a great time that day, learned a lot and met some new friends!

I rode with CMR a lot that year and dramatically improved my skills. We did some motorcycle touring and multi-day rides, and I even rode alone almost 400 kilometres from Castlegar to Vancouver! I was definitely hooked! It was hard to wipe the smile off my face every time we got to ride some great twisties.

The Next Big Thing

I continued motorcycle touring with CMR in 2016 and took advanced rider training to improve my skills. I began to think I’d like to get a bigger motorcycle as I was having trouble keeping up with my friends riding big baggers and cruisers. My confidence was growing bit by bit and I thought I’d be able to handle a bigger bike. I started to look around and think about what kind of bike I’d like to get when I stumbled onto this beauty:

This is a 2013 Triumph Trophy 1200SE – a beautiful sport-touring bike! I test rode it with a friend who was also interested in a Trophy and was immediately enthralled! It was going to be mine. To be honest, I also thought about the Yamaha FJR and the Kawasaki Concours, but both didn’t feel quite right when I sat on them. A motorcycle just has to feel right.

It took some time to adjust to a much bigger and more powerful machine. I had to really steel myself not to be intimidated by it and feel confident enough to know that I had the skills to ride it. That first season of motorcycle touring with the Trophy saw me drop it more than a few times but only when stationary, which was embarrassing enough. The Trophy weighed considerably more than the Honda and it took me much longer than I expected to get fully comfortable with it. But, by the end of the season in 2017 I was riding it like I stole it!

Making it Right for Motorcycle Touring

The one part of the Trophy I could never get used to was the colour. I really didn’t like the colour. But, Triumph only manufactured the Trophy in black, blue or silver. I felt strongly that it needed to be red. I could picture it red and waited patiently for Triumph to get the message that they needed to introduce the Trophy in red, but somehow instead of listening to me, Triumph decided to discontinue the Trophy! How rude!

I decided to take the bull by the horns and make my dreams come true. This spring I had my Trophy finally painted the right colour:

2019was fantastic motorcycle touring year on my new red Trophy! We had some great trips all over beautiful British Columbia this season and I’m proud to say that I’ve put almost 35,000 kilometres on my Trophy so far! To say that I love riding it would be an understatement. It’s fast, responsive, easy to handle and I didn’t drop it once this season! 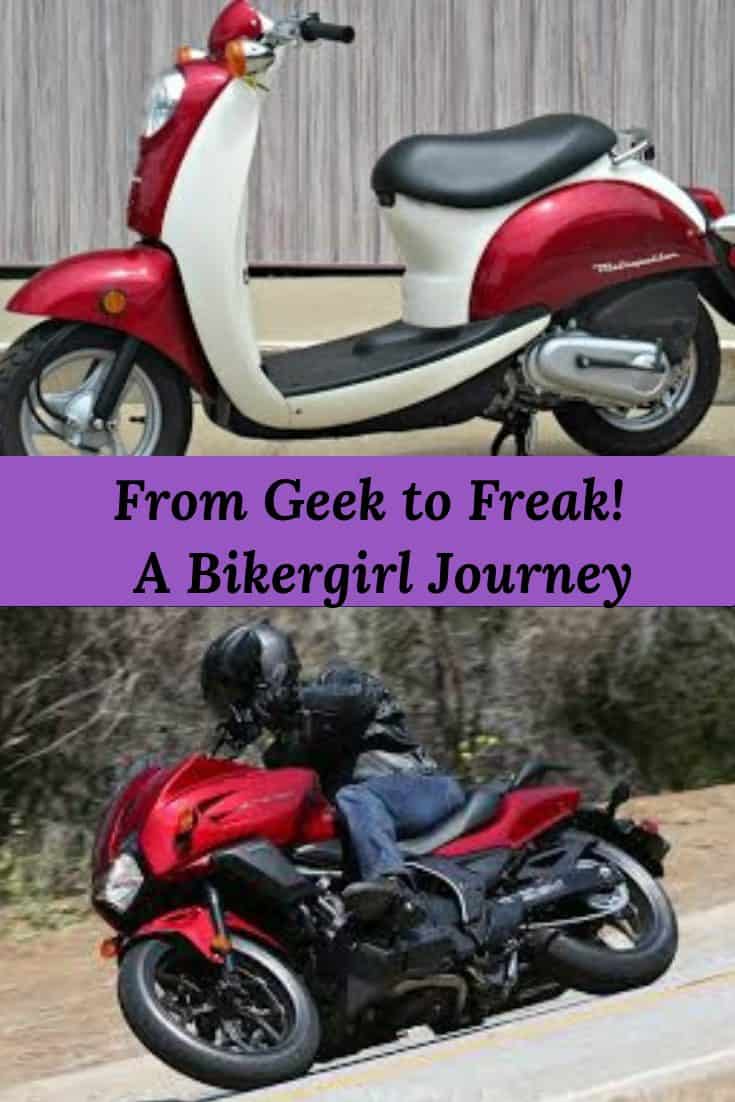